The woman wrapped the child against the cold
And walked into the forest where the glow
Of moonlight pooled a deeply shadowed gold
Beneath the trees on softly shining snow.

She gathered wood, the baby on her back,
And built a fire, its warmth a dancing light
Upon a great flat rock protruding black
Into the lake’s infinity of white.

Then, in the dark, sat, death-still, beside
The flames, the baby in her arms, the smear
Of stars above their heads a radiant tide
Of silence singing to the ebbing year.

At last, her voice a permutation slipped
Into the night, she started chanting words
Born deep in spirit as the blackened crypt
Of waters stirred beneath lake ice, and birds,

As black as mourning shrouds, began to fly,
The forest stirring like the waters, wind
A whisper as the baby voiced a tiny cry
And shadowy trees began to sway and bend.

The woman got up on her feet, her voice
As silver as the moon, and sang as deer
Began to bound onto the ice: “Rejoice,”
The woman sang, and as she sang the fear

Felt during hours of pain-filled, labored birth
Dissolved into the biting wind and light
That danced with deer upon the lake, the earth
And living integrated with the night.

I am not a sequins person,
so I cut all the sequins off
the shirt I bought.

It took two hours
because each sequin was
knotted and sewn by hand.
The tag said,
”hand sewn garment.”

It had taken the child,
or young woman,
many hours to complete—
piece-work she had perhaps
taken home to make a few
extra pennies.

10. Not Just a Little Girl Alone

The morning light spilled on the floor and woke
Wei from a dreamless sleep. She yawned and stretched,
Got up into the cold of early morning.
She built a fire to take the chill away,
Then fried potatoes on the stove before
She shrugged into her heavy coat and stood
Before the door, her heart-beat loud, her hands
So still they felt as if they’d never move.
She felt her mother’s hands move through the air.
She let her hands move like her mother’s hands.
Light jumped into the early morning light.
Outside a hissing sound steamed through the air.
Wei stopped the motions, pushed against the door.

A wall of snow confronted her beyond
The space her light had made around the door.
She started weaving hands again, the light
Streamed from her fingers in the frigid cold.
Snow turned to steam, a whiteness hissing up
Into the morning’s crystal clear blue sky.
She walked toward the wood pile, open ground
Materializing as she slowly walked.
She felt triumphant, filled with victory.
The storm was gone, and she could make a path
Through seven feet of hard packed, drifted snow.
She’d make it through the winter storms and cold.
She was not just a little girl alone.

The Old One, tired from lack of sleep, went out
Onto the ledge outside her cave and launched,
her wings alive to currents in the air,
Her eyes so deep with seeing that the universe
Throbbed, blazing morning light, around her head.

She flew above the cabin where the girl
Was steaming snow into the morning skies.
The sight of magic shining in the sun
Unsettled her; the girl unsettled her.

A moment later, higher in the sky,
She saw two hunters, with their snowshoes sunk
Into the sweeping plains of drifted snow,
Strain up the mountainside, the snow too deep
To let them make the three day trek to where
The human girl was gathering her wood.
They’d be at least a week at struggling
Up slopes that steepened rising into mountains.

What should she do? She asked herself, disquiet
a power in the steady beat of wings.
What madness had the girl brought to the world?

She swooped toward the hunters, forcing them
To see her hurtling from the shining skies.
The hunters stopped and looked at her, dismay
And fright stunned through the way they stood and looked.
The one she’d singed raised up his arm and fist.
She tipped her wings and soared toward the mountains.

She flew above the cottage where the girl
Was loaded down with heavy chunks of wood.
She swooped so low she had to swerve to miss
The cottage roof, her whirling, golden eyes
Locked deep into the girl’s small human eyes.

Wei did not flinch or turn her head away,
But looked into the Old One’s eyes, a question
Unsaid inside her look. Ssruanne soared high
Toward the mountain peaks again, toward
The places where the wind blew unabating
In fierce intensity and moaning rage.

Wei felt the dragon’s wings before she saw
The eyes that coldly bored into her mind.
She felt intelligence inside the glare
And felt the dragon searching deep inside
Wei’s heart. She stood and watched the golden dragon
Fly up toward the mountains high above
The peaks that towered over where Wei lived.
She fought to memorize the dragon’s shape
And how it felt inside its golden eyes.

Inside the moaning winds the Old One sent her thoughts
Toward the human girl. Run child, she thought.
The hunter has his cunning and his bow.
The dragons have no love for human kind.
Child, run and hide, she thought. From all of us.

Note: This is the tenth installment of a long poem. Inspired by John Keats’ long narrative poem, Lamia, it tells a story set in ancient times when dragons and humans were at peace. Click on the numbers to reach other sections, or go to the Categories box to the right under The Dragon Epic. Click on 1 to go to the beginning and read forward. Click on 9 to read the ninth section of the poem. Click on 11 to go forward one section.

a photograph by Sonja Bingen 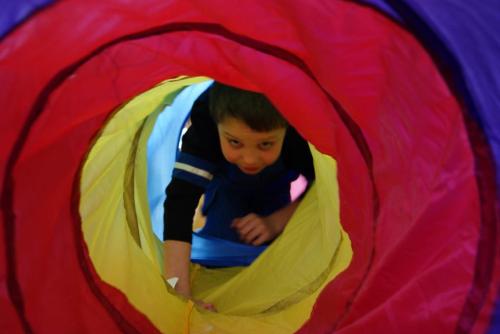 Our youngest grandson, Joey, is autistic. His mother, Sonja, and father, Bill, have patience, grace, and courage in abundance. As a result Joey has discovered fun.