Sweet Corn in the Desert 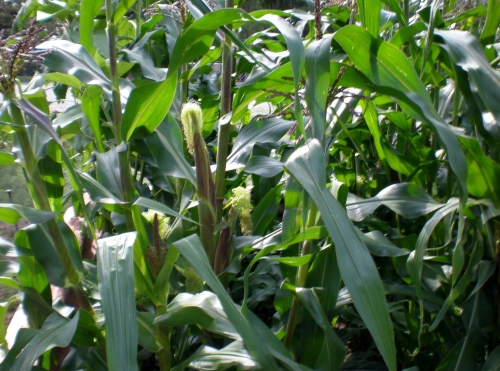 Ethel grew up on a dairy farm not far from Wausau, Wisconsin. The farm, its woods, and the stream that ran through the farm often finds its way into her poetry, but perhaps the greatest skill she took away from her childhood was her ability to grow anything anywhere. The Pueblo and Navajo who live in the country around Continental Divide have traditionally grown the three sisters: Corn, squash, and beans. We had not lived in New Mexico for long before Ethel picked up the magic of this combination of plants. This year, however, her corn has been the most spectacular of any year since we moved here. She made compost all winter and spring and has fed the small corn patch in our yard strategically since early spring. She has watered most mornings during this terrible year of drought, and the result is the tallest sweet corn to be found anywhere close to here. The beans, wrapped around the corn stalks, is just as profuse, resulting in a good year for Ethel’s crops.

10 responses to “Sweet Corn in the Desert”